A downloadable game for Windows

Kimono is out for revenge against the Shogun.  Defeat all her enemies and attain inner peace.

This game was made in 48 hours for PastelJam 2018. An updated version is coming soon. Follow @KimonoGame on twitter and visit kimonogame.com for more info soon.

CLICK and DRAG mouse from KIMONO to an ENEMY to KILL

Hold Right Mouse and drag to rotate camera. Use the Mouse Wheel to zoom in and out.

Thank you!
I really enjoyed the gam

This is a good game, It has good graphics and gameplay. but there is a flaw you should add some much needed sounds and music.

will this game ever come to OSX?

We played your awesome game here, :D Thanks for such a fun puzzle experience!

I loved this. It was the perfect level of challenging. Great work :D

TIME ONLY MOVES WHEN YOU MOVE

Reply
Raithias3 years ago
Kimono is a fun game. It's easy to figure out, the gameplay is simple. It's great for what it is but, it's lacking some things that I think would really make it stand out even more. The biggest is background music. It sucks to sit in silence throughout the whole game and, I think that takes a lot away from this. Another thing I feel could make a difference is adding a story to this. We don't know who she is or, why she is fighting even though it is fun to do.
Reply
Jackques3 years ago

i enjoyed your game

AVENGE MAH HONOUR! /re upload due to no sound

We played this on our channel and had good fun. Totally didn't realize we could rotate the camera! :p Add some sound effects and a little narrative and it would be flawless.

This'd be a great phone game, for real. I see a lot of potential in this.

I think the core gameplay is interesting enough to turn into a more complete game experience. But just as a stand-alone, it works.

Sound and some music would go a long way to polish the experience as is. A narrative would be great to give context.

I wish being "too far away" didn't cause issues. It's not a huge deal because restarting is easy. But... it is a pretty silly way to "lose" the attempt.

If it was taken further:

Basically, I wished for more control and variety in the gameplay.

I found I did a lot of trial and error, because I had little feel for whether a move would work or not when enemies were close.  Often I found myself wanting to be able to use positioning (i.e. getting behind an opponent) a lot and being disappointed that this didn't matter. I also found myself wishing for more elaborate moves. For instance: lining up 3 targets and being able to slice through all 3 in one dash attack, or ducking past an onrushing guard to bypass them. or quickly strike at two nearby targets in rapid and fluid motion, knocking one enemy into the others. If these moves were limited or required specific setups, that would be cool. Part of the game is using the aggro/follow to re-position the enemies further apart. This is just expanding that.

Environmental objects and physical barriers would be nice as well. Interactive elements like sand, water, boxes, etc. Things the player could use advantageously, etc.  Tons of room to do more.

But it looks awesome. And feels pretty nice to play!

I'm glad you played my game. You can rotate the camera by holding the right moues button and moving the mouse.

amazing soo addictive..it'd be incredible to have it on android

this game is really great. i remember something from LD41 game called onirix (if im not wrong). this game just need little slashing sound and zen BGM and this game completely polished i think

This game is so amazing all it needs is more maps maybe a soundtrack and this game could become the best :D

This is an amazing game just a bit short for my liking though, other than that its great

good for training for Battle would recommend

can't save game and if i go to far so i can't kill the others, I have to press Esc and play round 1 again :( - sad

Thanks for playing. Yes there is no replay / restart button in this version. The simplest way to restart a level is to fail the level (get  yourself killed). This will then allow you to replay that level. I hope you enjoyed the game apart for that :)

Right click mouse allows to rotate the view and select another enemy. Got stuck like you and I randomly tried other controllers :)

Would like a beserker mode where she headbutts enemies and they explode
or the ability to target several enemies at once as a one-shot move.

It would also be cool if the enemies don't fall down until the last hit, at which point, they all slide in half diagonally and fall to pieces :D

good concept, good art. this would be perfect for mobile too. 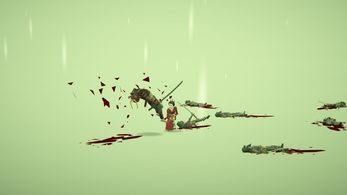 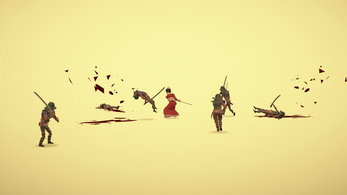 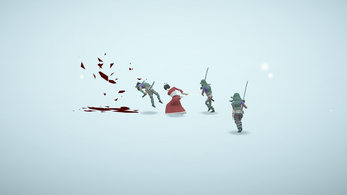